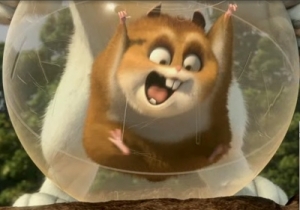 Several weeks ago, my family watched Bolt on DVD. While titled after the movie’s main character, it seemed the movie was created to showcase Rhino the hamster. If my family’s outbursts of laughter are any measurement, Rhino virtually stole every scene.

But one scene caught me totally off guard. At the movie’s climax, Penny, Bolt’s owner, is trapped in a movie studio that is engulfed in flames. Bolt the dog, Mittens the cat and Rhino the hamster rush toward an entrance to the movie studio. Mittens asks, “What should we do?” Bolt responds, “Just make sure I get in there.” Surprisingly, Rhino speeds through the door in his hamster ball and uses his plastic ball to bear the weight of the building’s collapsing metal frame while Bolt shoots past to find Penny. As his plastic ball begins to splinter under the weight, Rhino cries out, “It’s a good day to die!” And in the following seconds of that scene, you realize that he was actually willing to die so that Bolt could go on to save Penny.

As the movie’s action continued, my eyes welled with tears and my mind lingered on that scene. Okay, okay, I know it was a cartoon. But there was something poignantly relevant in that moment that needs to be unpacked. Throughout the movie, Rhino gives himself wholeheartedly to the adventure. And at the most crucial moment, when the other side character wonders how to respond, Rhino instinctively and naturally acts. At the instant when everything counts, he automatically does what’s needed. He responds with what the ancient fathers called “virtue.” His courage and self-sacrifice had become second-nature, so embedded in his flesh and bones that he throws himself into certain death on behalf of his friends without even hesitating to think about it. His body and mind operate as a single self-sacrificing unit, “It’s a good day to die!”

Rhino’s character reminds me of something St Paul says in Colossians. He says that he and his compatriots are praying for the Christians in Colossae so that they may lead lives worthy of the Lord, fully pleasing to him, bearing fruit in every good work and growing in the knowledge of God. Lives worthy of the Lord, in which goodness and knowledge of God are second nature and embedded in flesh and bone so as to be ready to act instinctively in the moment.

So, what does a life worthy of the Lord look like? If the self-help titles available at the local bookstore are any indication, such a life would be success in all areas of living. But is Jesus’ life, ministry, death, resurrection and glorification all about my success in relationships, money and business? I don’t think so. In fact, and this might sound sacrilegious, I don’t think Jesus cares a whole lot about my success. There are much more important things, such as my salvation.

So, if Scripture and the Church’s teaching are the final assessment of a life worthy of the Lord, then such a life should personify sacrifice — instinctive readiness to give myself for the good of others. A life worthy of the Lord is a cruciform life, a life in which every thought, feeling, and action is shaped by Christ’s cross.

In the movie, Rhino yearns to have Bolt’s signature lightning bolt branded upon his fur. Perhaps I need to yearn more for Christ’s cross branded upon my heart.

One thought on “Surprised by Rhino”

As a parent, when I held my young infant and watched him grow over the years, I imagined what kind of life he might live, guessing his life’s trajectory. What kind of man would he become? What kind of friends would he have? With whom would he fall in love? How would he spend his […]