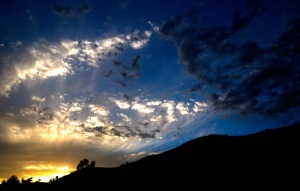 I enjoy rereading books. Even though I know how it will climax, the journey is so enjoyable that I return over and over. And sometimes knowing the ending enhances subsequent readings.

The same applies to the Gospels, Matthew’s in particular for this post. Here’s a climactic line from Matthew 8.

I wonder what Jesus’ original disciple thought when they heard this. Frankly, they must have been freaking out just a little bit. Mere hours before, they thought they were going to drown in a storm. Then their Rabbi calms the tumultuous elements by simply speaking to them. WHAT!?

This is the big reveal to which Matthew has been building in the first part of his story. Jesus has defeated the devil on his own turf. He has called his twelve disciples, symbolically restructuring Israel’s twelve tribes around himself. He has begun teaching and healing and crowds have begun to follow him. Jesus then teaches of God’s imminent kingdom in chapters 5, 6 and 7. Matthew follows this up with individual moments that demonstrate Jesus’ authority over disease, creation and evil, like a poker player dramatically revealing each card in a winning hand. Now Matthew drops the final card and there’s a collective gasp. For the first time from a human being’s mouth, Jesus is called by by the title, “Son of God.”

I think it’s important to pause here and gather our historical bearings. In Israel, the title “Son of God” had layers of meaning. It was used for angelic beings (Gen 6.2). It was also used for the nation of Israel (Ex 4:22). It was later used for the Davidic king (Psalm 2.7). By Jesus’ day, it had developed into a messianic title. The Messiah was the “anointed one.” He was to be King David’s true heir, through whom YHWH would rescue Israel from pagan enemies, judge the world and set everything right. Also, in the surrounding Roman culture, “Son of God” was also a title for Caesar, the self-proclaimed Lord of the world.

All of this is to say, “Son of God,” in its historical context in Matthew’s story, referred to Israel’s true king and did not have any reference to deity. Throughout Israel’s history and in Jesus’ time, “Son of God” never meant “deity,” “second person of the Trinity” or “equal to God.” To oversimplify, “Son of God” is more of a political title. Israel’s king represented Israel’s God and was therefore called the “Son of God” (2Sam 7:14).

Now the title would gain its fullest meaning after Jesus’ resurrection. His followers would recognize that he was the true embodiment of YHWH. By the time of Paul’s writings, “Son of God” will have transitioned to its fullest meaning as the one who was already equal with God and was sent by him to become human and to become the Messiah.

Why bring this up? Because it’s too easy for the fullest meaning of the phrase to eclipse the nuances Matthew is using and therefore short-circuit the logic of the story. In this dramatic reveal in Matthew 8, the shadowy evil destroying these two men proclaim Jesus to be the “Son of God,” Israel’s true messianic king. Later Jesus’ disciples and then Peter will also declare him to be the “Son of God,” giving further validity to the claim. During Jesus’ trial, the chief priest asks him if he’s the “Son of God.” Knowing the end of the story, we know the answer that the chief priest cannot see. And finally at the foot of the cross, the Roman centurion, an enforcer of Caesar’s will (remember Caesar used the title “Son of God”) proclaims that the dying Jesus is the true “Son of God,” the true Caesar. But how can Jesus be the true messianic King of Israel if he’s dying at the hands of Caesar? His title “Son of God” will be validated in a few short days.

Why is this seemingly roundabout journey so important? Because Matthew is telling the climax of Israel’s centuries-long story. Israel’s Scriptures declared that her true King was not only King of Israel, but Lord of the nations. Matthew has demonstrated that Jesus is the “Son of God,” Israel’s true king. By doing so, he’s therefore proven that Jesus is the true “Caesar,” the true Lord of the world. And as his followers continue to reflect on his words and life, they quickly realize that he actually embodied YHWH, saying and doing what only YHWH could say and do.

When modern Chrisitians proclaim Jesus as “Son of God” we are proclaiming him in the fullest sense of the title – the Only Begotten Son of God, second person of the Trinity, very God of very God. But the full meaning sweeps up the other meanings as well. We’re also declaring Jesus as Israel’s true King and the true Lord of the world.

This is important because the same evil force driving the two men in Matt 8 still works in our world. Personally, it drives our rage, lust, greed and fears. Socially, it drives companies, political parties and their candidates, governments, and even churches. Globally, it drives forces like economies, technologies, globalization, and trade. And like 2000 years ago, the evil asks, “What do you want with us, Son of God?”

Only by being the fulfillment of Israel’s story can Jesus be God’s answer to evil. God didn’t jump straightway from Genesis 3 to Matthew. Rather, he works with and through Abraham, Moses and all the characters, plot twists and promises in Israel’s long story — a story that climaxes with Israel’s King ascending his throne, a cross, in order to defeat evil and being raised from the dead in order to launch God’s New Creation. Now we are swept up into that story as well. We are both beneficiaries and agents of Israel’s true King and the world’s true Lord, who is also God in the flesh. How we live and continue his work must be shaped by this story and all its nuances so we we may live and work in the same manner he did.

Easter 2020. Because of COVID-19, the places we would normally see and hear the joyous signs of Easter are vacant and silent. Freeways are virtually empty of travelers. Churches, normally filled with exuberant worship and preaching, are closed. Parks are empty of children playing and families celebrating. But just like the large stone sealing Jesus’ […]