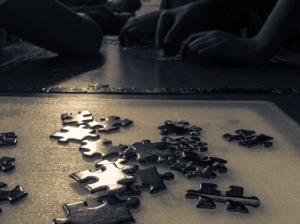 I ended my last post by stating that the consequence of the three-layered mistake outlined by NT Wright — a Platonized eschatology, a moralized anthropology and a paganized soteriology — is that we live in a distorted story that seems to be supported by portions of Scripture, but that is actually not the biblical story at all.

Understanding the Bible’s overarching narrative and its details is similar to assembling a 2000-piece jigsaw puzzle. It can be a daunting task for most people. Inside the box are hundreds of small pieces, all seemingly interrelated, yet frustratingly disconnected.

The common strategy most of us use is first to spread out all the pieces on the table. That’s a good start. If we only worked with 25-30 pieces at a time, we would never move forward. So putting the entire mess before us is good.

Next, we usually gather up all of the “edge” pieces we can find to assemble the border. Again, that’s a good move since it’s fairly simple. Having a border gives us some context upon which to assemble the remaining puzzle.

Then using the photo on the box, we try to gather related pieces by color, texture or transition. One pile of pieces seem to depict the roof of a house. Another group resembles the flowers in the garden. Another pile are pieces to the clouds.

But what happens if someone has accidentally replaced the box cover with a similar-looking, yet altogether different box cover? Look at these two similar box covers for jigsaw puzzles:

In this analogy, the puzzle’s box cover is the story we tell and retell. And the actual puzzle pieces are the details to that story. But when we attempt to assemble the detailed puzzle pieces based on a similar-looking yet completely different box cover, we end up with a frustrating mess. We try to jam pieces together that shouldn’t be together. Or we may assemble small portions of the puzzle, but try placing them in the wrong sections of the overall puzzle, misled by the wrong box cover. Or we simply ignore pieces that just don’t seem to fit the picture with which we’re working.

We can usually tell when we or someone else is not living in the correct biblical story. Years ago, this happened to me as I realized that I had to ignore portions of Scripture or extract certain passages from their original context to support my version of the biblical story. At that time, I remember coming to the realization that my version of Christianity was foreign to what the Church of the first several centuries had believed and practiced.

So I began a long journey of trying to understand the biblical story and its supporting texts within the original writers’ and audiences’ worldview. For the past 15 years, primarily as a “hobbyist” theologian since I’m no longer in professional ministry, I have tried to learn the correct biblical story so that it can reshape my theology, my worship and my life. The effort has been worthwhile. The full biblical story now makes sense and all the pieces of Scripture actually fit nicely together.

Chain link droplet.
Working in the rain.
A beautiful Sunday morning in Glendora!
During sunset yesterday, Debbie and I visited Kenneth Hahn State Park, which overlooks Los Angeles. We arrived around sunset and didn’t get a chance to look for different vantage points. So I spent my time on this view. I guess we get to visit this location again!