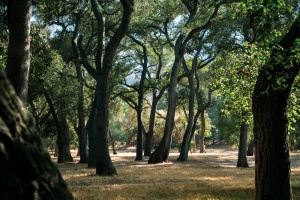 As I read and reread the last couple of chapters of Revelation, I’m struck by the idea that this is not the end of God’s Story. I think we’ve been formed by our culture to read Revelation 22 as though it ends with an assumed “And they lived happily ever after.”

As the book climaxes, all of God’s plans come to fruition. Evil is vanquished, humanity and creation are restored, and God dwells with his people. The New Creation launched by Jesus in his resurrection completely arrives on earth. The dimensions of heaven and earth are finally merged. God’s people will have their resurrected bodies, animated and energized by God’s Spirit. And they will be fully formed into the likeness of Christ.

“Then he showed me the river of the water of life. It was sparkling like crystal, and flowing from the throne of God and of the lamb through the middle of the street of the city. On either bank of the river was growing the tree of life. It produces twelve kinds of fruit, bearing this fruit every month; and the leaves of the tree are for the healing of the nations.”

In symbolic language, St John describes the core of life on God’s renewed earth —the Tree of Life, fed by the Water of Life. And the leaves of this Tree are for the healing and therapy of the nations. It sounds like there’s still work to be done in God’s New Creation. This is different from the popular vision of living among the clouds, reunited with loved ones, in complete bliss.

So the question I have is, “What will the human vocation as God’s image-bearers and kingdom of priests look like in the New Creation?” What will life and work be like for a worldwide community of people with resurrected, Spirit-empowered physical bodies, who are formed into genuine competent love for the good of the world?

Scripture implies there will be some level of continuity between this creation and the New Creation. If so, what will the various elements of human life and community look like — politics, education, technology, economics, travel, art, communication, research, and more.

I realize this is absolute assumption on my part. And I’m not trying to speculate about some “sci-fi” utopia. Rather, I want to envision what human life and community might actually look like when it’s fully formed into competent Christlike love and completely empowered to express it. Because that is what Jesus modeled during his ministry. He competently loved the people and expressed it powerfully to heal them, teach them, feed them and lead them. What will that look like in God’s New Creation when all of God’s people are able to love like that?

St Paul implies this very thing in 1Corinthians 15. After providing a detailed instruction about the physical resurrection, he ends with the following encouragement:

“Therefore, my dear brothers and sisters, stand firm. Let nothing move you. Always give yourselves fully to the work of the Lord, because you know that your labor in the Lord is not in vain.”

Because there is a future physical resurrection when God’s New Creation is fulfilled, keep doing the Lord’s work of competent Christlike love in this present creation. That work will not be worthless. In fact, that work forms the building blocks that God will incorporate into his New Creation. We live God’s future now in anticipation of that future.

Perhaps we need our imaginations sparked with the ramifications of God’s greatness and goodness filling the earth and our lives, not only now, but also into his eternal future.

Perhaps every Bible should end with “To be continued…”

Today was a wet and gloomy day at the park. So I decided to take some black and white images to reflect the mood.
Injury and weather have taken the wind out of my sails. This the first photo I’ve taken in a while. It’s not much. But it’s usually the simple things that catch my eye.
Chain link droplet.
Working in the rain.