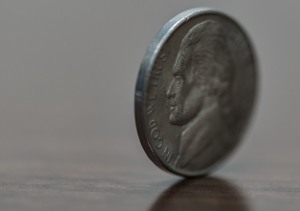 “Is it lawful to give tribute to Caesar or not? Should we pay it, or shouldn’t we?”

The question is not a neutral inquiry. It’s a loaded question, a well-conceived trap.

This is a very dangerous moment for Jesus. His kinsmen recognize that he is leading a kingdom-of-God movement. They interpret it as a revolution, a push for Jewish political independence. Similar attempts had been made by others in Israel’s recent history. This is what the Messiah was supposed to do, so the crowd’s expectations were high. One way these revolutions declared Jewish independence was to stop paying taxes to Rome. But Rome did not tolerate revolutions. People had been executed for previous anti-tax revolutions.

So the question is meant to flush out Jesus, to make him go public either as an anti-tax, and therefore an anti-Roman revolutionary, or as a compromising leader who doesn’t truly oppose Rome and therefore is not truly the Messiah.

Almost everyone in the crowd hoped he would declare an anti-tax stance. For some, this would give them the evidence needed to report him to the authorities. For others, they longed for a leader who would deliver them from Roman rule. And opposing Roman taxes is exactly what the Messiah would do. Regardless of the motivations, Roman justice would be swift and Jesus would be killed. And his enemies would finally be rid of him.

But if he didn’t oppose taxes, it would prove he wasn’t the Messiah and he risked losing the people’s loyalty or worse. So this was a “damned if you do and damned if you don’t” scenario.

All it would take is the wrong statement and the trap would spring. But Jesus recognizes the game they’re playing. He knows this volatile moment requires a pithy proclamation, not a lengthy lecture.

“Bring me a coin,” Jesus requests. And someone produces one. It’s not an ordinary coin. It’s a Roman coin. A hated, despised coin. For stamped on the coin was the image of Caesar and the inscription proclaiming him as “son of god” and “chief priest.” Jews were not supposed to possess images of humans or gods. Yet someone did, as did most in the crowd.

“This image and this inscription. Who do they belong to?” Jesus almost spits it out, disgusted at the coin in his hand. A false ruler professing to be a god.

“Caesar,” is the crowd’s answer.

The crowd gasps! They know what he’s implying. For each of them has been taught from childhood that they bear the image of God.

And like a flip of a coin, Jesus flips the conversation on the crowd. They were expecting an uncompromising Messianic revolutionary, one who would stick a fist in Rome’s face. But he was exposing their own compromise. Their idea of a revolution was to withhold money from Rome, money they shouldn’t even possess or use. Yet, they carried the despised money in their own pockets and pouches. A people who once declared “God is our King” now lives comfortably under a false king pretending at being a false god.

The real revolution isn’t about withholding. If Caesar wants his despicable coins back, then give them to him. They’re his to begin with. And you’re already inwardly compromised and enslaved to his system for having and using the coins.

The true revolution that needs to occur comes about by giving. So more importantly than giving Caesar his coins, give God his “coins,” your lives that bear the stamp of his image. That will change you and then that will impact the world around you. That’s how the real revolution takes place.

You see, Jesus’ answer wasn’t a safe dodge. He was a revolutionary. Just not the kind everyone expected. He knew he was on the road to a crucifixion just like the anti-tax revolutionaries of his past. But his revolutionary world-altering death would be on his own terms. He would not die like those before him, locked in the conventional power struggle with Rome. No. That’s not how false powers are overturned.

When, in loving loyalty, God receives his due — the human “coins” stamped with his image — then the true revolution can begin, a revolution of sacrificial love.

Injury and weather have taken the wind out of my sails. This the first photo I’ve taken in a while. It’s not much. But it’s usually the simple things that catch my eye.
Chain link droplet.
Working in the rain.
A beautiful Sunday morning in Glendora!