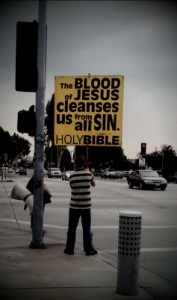 The title of this posts steals the title from one my favorite podcasts called “The Way I Heard It with Mike Rowe.” If you haven’t listened to his podcast, do yourself a favor and head over to Mike Rowe’s website  and have a listen. Each episode is short and is an interesting story about a historical figure.

While I’m stealing the title from Mike’s podcast, this post is neither short nor as interesting as his material.

Having converted into Christianity during my last year in high school, I was immediately immersed in the popular version of the Christian story.

So this is the way I heard it:

God created the physical world. Into that world, God created a man in his image named Adam. God gave Adam the responsibility to rule over the world. To help with this endeavor, God made a woman named Eve from one of Adam’s ribs in order to be a helper for Adam. God commanded Adam and Eve to be fruitful and multiply and to rule over the earth.

But the devil, in the form of a snake, tempted Eve, who then tempted Adam. Adam and Eve ate the forbidden fruit. At that moment, spiritual and physical death entered creation. Now under a curse, Adam and Eve were expelled from the Garden. They and the all of their descendants were forever guilty of their transgression and would be unrighteous. Being morally bankrupt, there was nothing they or the rest of mankind could do to change their standing before God and were destined to hell and eternal separation from God.

The rest of the Old Testament was a lengthy example of humanity’s unrighteousness, focused primarily on Israel. God chose Israel to be his special people. But Israel continued to demonstrate their unrighteousness through sin and idolatry. Eventually their sins brought them to the point where God had to expel them from the Promised Land.

But through Israel’s sordid history, God dropped occasional prophecies to them about how he would come and rescue mankind from their sins.

And he ultimately did! God became Jesus. He was born to a virgin named Mary, who was randomly selected by God’s grace to bear God in her body. Jesus, being God, performed amazing miracles and told people that through his death, everyone could have their sins forgiven, have communion with God again, and eventually go to heaven when they died. He also taught people how to live after they received forgiveness from their sins.

The New Testament reveals that God cannot stand sin. Therefore, only righteous people can go to heaven when they die and unrighteous people are destined for hell when they die. Because of Adam and Eve’s disobedience, every human is guilty of sin and objects of God’s wrath. It’s like each of us has a huge moral debt in our heavenly bank accounts. Therefore, every human being is unrighteous and destined for hell and there’s absolutely nothing any human could do about it. Any good a person could muster wouldn’t satisfy his or her moral debt let alone anyone else’s. In addition, the consequence of sin is death. Death is part of the punishment for sins. So each person is condemned to die for their own sins and then go to hell, forever separated from God.

In order for a person to go to heaven, someone else without sins would have to die in that person’s place. So a sinless human had to die in order to rescue all of humanity. But there’s no such thing as a sinless human because everyone is guilty of Adam and Eve’s disobedience and also have committed their own sins in their lives.

But Jesus overcame this obstacle because being God, he could become a sinless human being. Being sinless allowed him to take God’s wrath on our behalf. So Jesus endures death on a cross for each of us, taking the “spiritual bullet” meant for us. He then returns to life three days later as proof that he was God. Shortly after that, he returns to heaven to await the time he would return and take his people to heaven in the Rapture and finish God’s plan.

From Jesus’ death onward, any person who accepts his gift of forgiveness is now saved. They are fully forgiven, no matter what they’ve ever done or will ever do. Jesus’ righteousness is now their righteousness. This allows them to have communion with God and to go to heaven. In addition, they can also be filled with the Holy Spirit so they can worship God, live a good life, and share with everyone else the good news that if they also accept Jesus’ gift of forgiveness, they can be forgiven and go to heaven.

And Jesus’ people are commissioned to do this until they die or until the Rapture, when Jesus will rescue his people to heaven and complete the final events of God’s plan which is to punish evil-doers, destroy this earth and take those who are saved after the Rapture to heaven as well.

And that’s the way I heard it.

The problem is that virtually all of it is wrong.

P.S. I’ve tried my best to retell the story as i would have genuinely told it 20 years ago and not as a caricature. To make my point, the day I wrote the first draft of this post, I went out to lunch and found the following tract at my table in the restaurant: 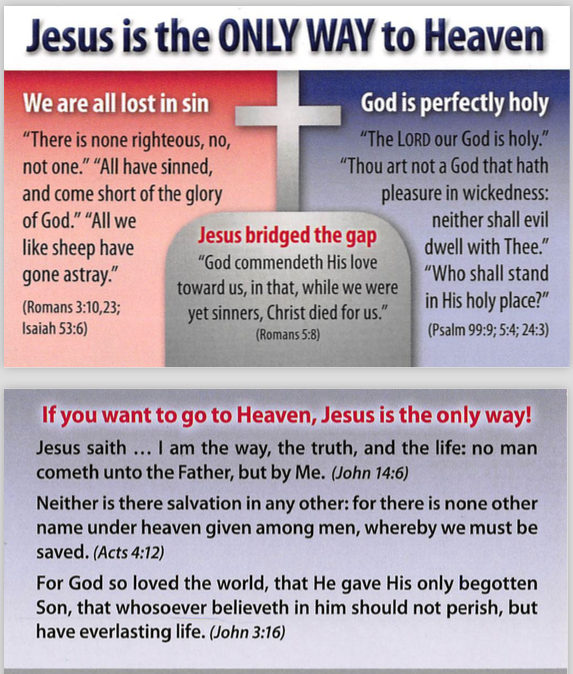 One thought on “The Way I Heard It”

The human vocation is to reflect. This is what it means to bear God’s image within his world. As with the moon, light doesn’t originate with us. Our job is to orient ourselves so we can receive and reflect his uncreated light — his character, love and wisdom — into his creation. Sony A7Riii, Sigma […]

What happens when the light pushes back the darkness to reveal thorns? What happens when prayers to remove them have no effect? You trust in the sufficiency of God’s grace and his ability to perfect his power through the weakness. Sony A7Riii, Sony 35mm 1.8

During a morning walk the other day, I was struggling with some “stuff”. In those moments, I can feel very alone. In the midst of my angst, my phone binged with a text from my best friend. He shared a photo of the snow they received in Idaho. I shared my turmoil and we texted […]